Best outcome from an unfortunate situation

After hearing a radio interview on the CBC in 2014, I decided to check our radon levels using a long-term testing kit from the Radiation Safety Institute of Canada. Three months later we got the bad news. Our level was 483 Bq/m2. After reading the Health Canada literature and lots more, we decided that we needed professional help. Enter Radon Works.

Rob made a house call in just a matter of days. He suggested some DIY mitigation procedures and hooked us up with a local supplier for a digital detector. We made some inexpensive fixes ourselves then tested the outcome. Sure enough, the radon levels in our basement dropped by 160 Bq/m2. Good news but unfortunately it wasn’t enough to bring our readings within Health Canada tolerances.

To solve our problem we went for the “full-up” mitigation solution–installation of a radon fan/vent system. Two-weeks later on a snowy day, Rob and Arthur arrived on schedule to install the fan. With minimal disruption, they did the work and had the fan online within a few hours. Now our readings are between 20 Bq/m2 and 36 Bq/m2. What a relief! As an added bonus, the humidity levels in our basement have never felt better. Everything is nice a dry.

Thanks Rob and Arthur! We’ll be sure to recommend Radon Works to our friends and neighbours.

1.3, or less than 50 becquerels. I now have the feeling that I made a sound investment to protect my family’s health.

The lowest figure I had during in a full year was 4.5, the highest was 11. The day you installed the system, short-term reading was at 7 or 259 becquerels, the most common figure I read on the monitor.

In my mind, this illustrates the job was efficient (and from what I could see and understand, state of the art). I expected a lot of mess with concrete dust, but there was really little, I expected something perhaps noisy, but the fan’s actual noise compares to what I would hear in a hotel when another room’s shower operates.

Have a great day. 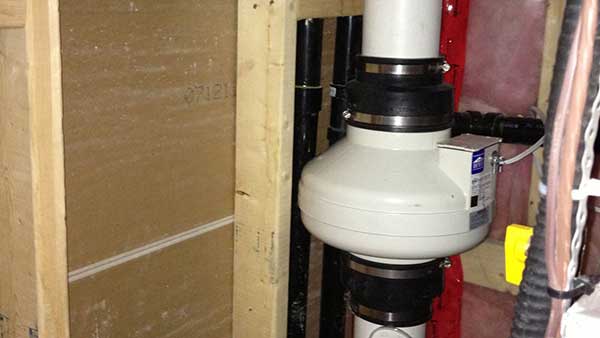 Get a Free Radon Consultation

Contact us for a free consultation on all Radon related matters and HVAC related IAQ issues.